We have not been making smaller releases like this. Most of the work is devoted to a larger update that prepares ElectrumSV for many of the exciting things you might see coming in the Bitcoin Association roadmap! However, a couple of the changes in this release are important enough to warrant setting aside the larger updates for now and getting a smaller one out.

Do you need an introduction to how ElectrumSV works?

We have a selected range of guides to common tasks that our users may want to do in our documentation, please check it out.

The only safe downloads are available from: electrumsv.io

Where can you get help?

Find our issue tracker here where you can create a ticket. Fill out the issue template, please! Otherwise we have no idea what steps you took or any of the other details and then we have to spend time asking you them anyway and you get help much later. Fill out the template for your own sake, if not ours!

We do not provide support over Twitter or any other forms of social media. Not only is it not guaranteed we will see your comments, it is a very painful way to do support that we avoid. If you need support, submit an issue on our issue tracker. Or you can raise subjects of interest on Unwriter’s Slack, or the Metanet.ICU Slack.

If you are a MacOS user and cannot install/run our latest release, please read this article.

What has changed in this release?

The main changes in this release have been listed below. If you don’t want to know the details, just read the titles. If you want to find out about smaller fixes, you can check the release notes in the Github repository.

This means that this release and later ones will be compatible with the STN into the future.

In order to reduce the startup time before it can be used ElectrumSV uses checkpoints for the different blockchains. Unlike other blockchains, the scaling testnet (STN) blockchain gets periodically reset and this means any checkpoint we have for it becomes invalid. Any ElectrumSV release (and this would include any from 1.3.12 and earlier) with an invalid checkpoint will never be able to connect to the STN ever again.

At this point having a checkpoint for the STN seems like a bad idea, and so the checkpoint has been removed. This will mean that any releases downloaded from 1.3.13 onward should always be compatible with the STN. 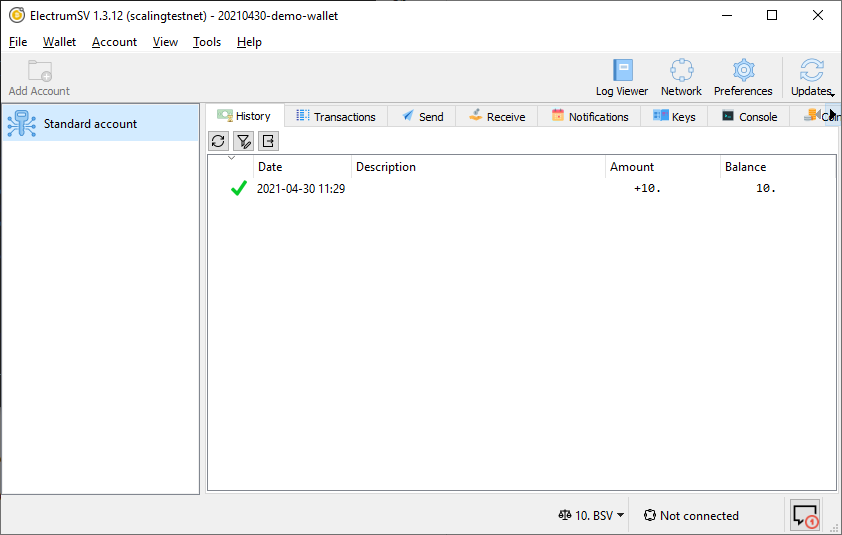 Using ElectrumSV on the scaling testnet.

In order to access the STN you also need a working server. The ElectrumSV run server has some hard to debug technical issues, which have led to it falling offline for a while now. However Kayvan from satoshi.io has been running his own server which he has kindly agreed to let ElectrumSV users use, and it is now built into ElectrumSV as the default.

You can read an article on how to access the scaling testnet with ElectrumSV on our web site.

Users who accessed tonnes of transactions or large ones would get errors using the wallet.

A while ago now, we identified a bottleneck with the wallet database in that different systems would ask for a transaction for perhaps some small part of data, and we would end up seeing them significantly slowed down reading that transaction from the database. In order to remove this bottleneck we added a transaction cache, and the problem went away. 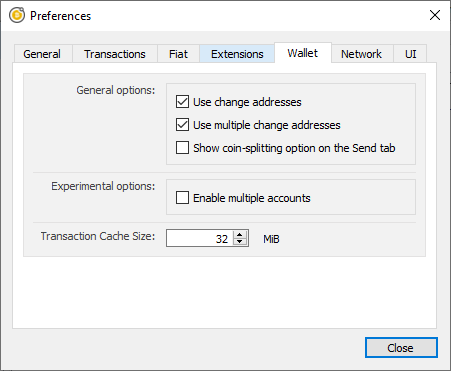 The transaction cache is configured in the wallet tab of the preferences window. 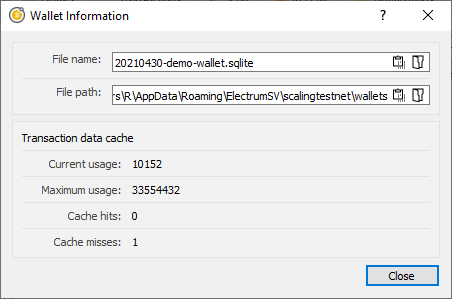 The transaction cache status can be seen via the wallet information menu.

We have one gracious user who encountered the problem just under a year ago, and who used our error reporting functionality to let us know. Without a reproduction case, it was not clear what the cause was and since only one user reported it (we would get significantly higher numbers of reports if it were a common problem) it was kind of ignored. However Aaron67 on the Atlantistic slack recently reported that he was creating very large transactions and was getting it as well. It turns out there was a typo in the original transaction cache code that has been there since it was first written, and with it being fixed in this release this year old bug should now be resolved.

While it is unlikely that any problem remains, given the nature of the typo and the observed errors, if anyone does experience problems with the cache they can disable it by setting the maximum size to 0. The screenshot above of the Wallet section of the Preferences dialog, contains the setting that needs to be changed.

Affects user who saved transactions as JSON and had to use the .txn extension.

One of the things you can do with ElectrumSV is load a transaction. You might do this because you have some random transaction you want to look at, or you might do it because you are a cosigner in a multi-signature account and need to sign your part. Perhaps you might have some other reason not mentioned here. Unfortunately, we had a filter so that the only files the file open dialog that we presented to allow you to select the transaction you wanted to load were those with the extension .txn. You could work around it and rename your transaction to have that extension if it did not already, but now we give the file open dialog a selection of filters including *.txn, *.json, *.txt and the open *.*.

Having recently gained access to a MacOS laptop for testing, for some reason MacOS decided that it needed automatically turn on dark mode in the middle of the day. This conflicted with the custom stylesheets we have, and looked unacceptable. We do not have time to spend working out how to detect if dark or light mode is used, and to add support for each. In fact I am not even sure it is clearly documented how one would do this with custom CSS stylesheet in the Qt5 UI framework we use.

Rather than forcing ElectrumSV users to disable auto dark mode entirely to avoid this aethetic crime, the only viable solution for now is to force light mode for the MacOS releases. If someone knows what is required and wants to put in the time to fix ElectrumSV to work with this auto dark mode thing, so people can have dark mode again in middle of the day and light whenever Apple decides that suits.. we're happy to accept pull requests.

What changed before this release?

Each of our release articles links to the article for the release before it. You can follow our releases back and see what changed in each, by the article that accompanied that release.

Read about what changed in ElectrumSV 1.3.12